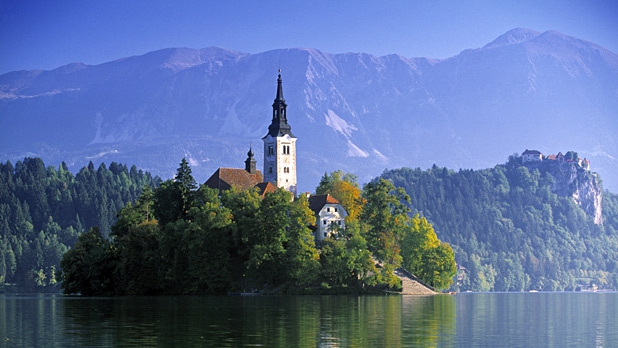 The pretty Slovenian town of Kobarid, squeezed between the peaks of the Julian Alps and the Italian border, is a magnet for hikers and adventure-sports enthusiasts. But nearly a century ago it was the heart of the Soca front, one of WWI's intractable conflicts. As Austro-Hungarian soldiers clashed with Italian forces in the surrounding mountains, a young Ernest Hemingway collected the wounded in his ambulance. Bringing a copy of the great writer's novelized account of the final battle for the front, 'A Farewell To Arms[1],' is de rigueur for visitors to the former war zone.

Visitors drinking Laško beer[2] in cafes read Papa's description of the chaos that once consumed the gentle valley: "There were troops on this road and motor trucks and mules with mountain guns and as we went down, keeping to one side, and across, under a hill beyond the river, the broken houses of the little town that was to be taken."

Today the old battlefront is stitched together by the 65-mile Walk of Peace, a trail popular with outdoors-loving Slovenes and campers who use it to access the many paths leading up into the Julian Alps. Hikers start from the Kobarid Museum[3], where a 3-D model of the front gives a clear-eyed view of what was at stake and provides trekkers with a survey of the local terrain. From there, they head into the hills.

The frequently bucolic landscape belies the bloody nature of the conflict. Not far up the trail sits the macabre Italian Charnel House[4], home to the bones of over 7,000 soldiers. In a dozen battles over two years, over half a million soldiers lost their lives on the surrounding slopes. The landscape changes rapidly. The lower trails are thick with trees, which took root as gunfire died down, and the mountain pastures host herds of grazing sheep. Views of sweeping valleys and medieval churches are common, but explorers would do well to mind their feet. Unfilled trenches scar the landscape.

Hikes are as easy or hard as you want to make them – aim for the ridge-top outdoor museum at Na Gradu, with its sparkling views to the Adriatic Sea, or climb the 4,459-foot peak of Mrzli Vrh, which saw some of the bloodiest fighting in the war.

If thoughts of the winter front are too chilling, you can hole up at the delightful Hiša Franko[5], a guesthouse set in alpine meadows on the outskirts of Kobarid. You'll be lured out of your boutique rooms by its excellent wine and cheese cellar – Italians now come back across the border just for its renowned gourmet tasting menus showcasing local seasonal produce, including the delicious Soca trout[6].

As Hemingway put it, "This was a strange and mysterious war zone but I supposed it was quite well run."

More information: Kobarid is only a beautiful two-hour drive north from Trieste. For trip planning, see the Walk of Peace in the Soca Region Foundation[7].