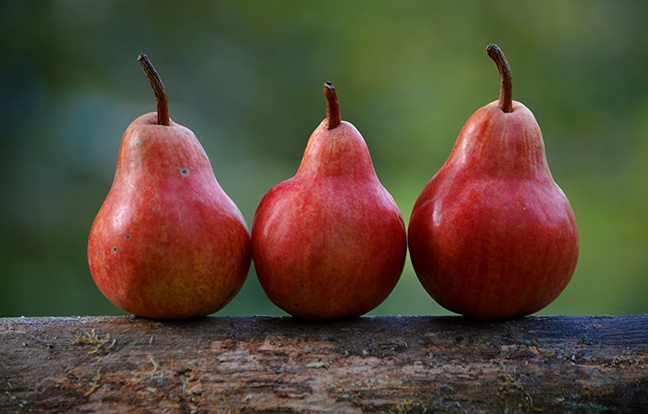 During recent travels I discovered a love for pizza. No, I was not in Italy. What made this pizza stand out from the masses was the incredible combination of prosciutto, spinach, and pear. Pear?! Yes, I was just as intrigued as you are.

When I took the first bite I was instantly transported to light refreshing summer meals outdoors. The mild sweetness of the pear played perfectly with the spinach, the cheese and the prosciutto. Instantly my thoughts turned to everywhere else I could incorporate pear. I have yet to stop thinking about this.

Pear has a mild sweet flavor and a fibrous internal texture. The mild flavor can help it go in the direction of something like spiced pear with deeper flavors, or it can perfectly compliment a summer salad. These pairings make it a necessity to incorporate pear into your food future.

Pairing this incredible fruit with greens is guaranteed to be a delicious combination of flavors in your mouth. Lately, a favorite pairing of mine has been a slice of artisan bread perfectly toasted, a bit of olive oil drizzled on top, covered with a bed of spinach, some prosciutto, herb goat cheese, and a few thin slices of pair to top it all off. This reminds me that summer is just around the corner and fresh flavors will soon be dancing everywhere.

A natural combination for pears is honey and cheese. As there is a large variety of pears, picking the right cheese to go with the right pears can make for an adventure. D’Anjou pears are best when paired with a creamy, tangy goat cheese, while Bartlett pears pair perfectly with salty brined cheeses such as feta and halloumi

Raw pears with some brie and a drizzle of honey are the perfect accessory to a glass of Sauvignon Blanc.

Mort Subite, a Belgian-focused beer bar in Austin, Texas, has been awarded the first U.S. Governorship by Trappist Brewery Koningshoeven (better known as La Trappe), one of the world’s 12 Trappist breweries.
[1]

La Trappe, a Dutch Trappist brewery founded in 1884 in Berkel-Enschot, Netherlands, selected Mort Subite after visiting and inspecting the bar to ensure it met a variety of special standards. It will be the first of four to receive La Trappe Governorship[2] distinction in the U.S. There are currently around 122 in Europe.

According to Artisanal Imports[4], an Austin-based importer and merchant of La Trappe and other European beers, the Governorship program began in 2016 and was established to recognize the bars and restaurants throughout Europe that have “made extraordinary efforts to sell, support, and promote La Trappe products and other Trappist beers.” After a successful run in Europe, the brewery has decided to extend its program stateside, and has selected Mort Subite as its first contender.

"Being invited into the Governorship program is an exciting evolution for Mort Subite,” said Mort Subite co-owner James Jackson Leach. “We are a Belgian beer bar dedicated to authenticity, and that means honoring Trappist beer. There's a story when you walk in here. There's a community of people that know and love this culture. Being invited into the program shows us that people notice and appreciate how dedicated we are here, locally and overseas."

To be considered for governorship, bars are held to “rigorous standards” and must meet a series of criteria involving bar appearance and atmosphere, beer storage, and serving conditions — for example, every Trappist ale must be poured in its original glass, as is traditional in Belgium — and bar selection, which must include a minimum of 12 Trappist beers and at least five from La Trappe. Further, Trappist beers must be listed on a separate menu, and finally, along with properly representing the La Trappe brand, the bar must host at least one La Trappe–focused event per year.

Mort Subite carries a variety of Belgian beers, including blondes, dubbels, tripels, quads, and lambics, with 24 taps pouring a variety of Belgian-style brands, along with a cellar properly stocked with more than 40 bottles. About a dozen of Mort Subite’s selection of ales are produced by La Trappe.

“The value of the La Trappe Governorship is that it really shines a bright light on quality, dedication, and service,” said Lanny Hoff, Artisanal Imports SVP-Brands Manager. “We are delighted that Mort Subite is the first U.S. La Trappe Governor, and we look forward to them reaffirming this commitment every year as they continue to showcase La Trappe and other Trappist brewers in the best possible way.”

The U.S. Grant, a Luxury Collection Hotel under the umbrella of Marriott International located in San Diego, has created a unique line of beverages from its mixology team: non-alcoholic craft beer. Billed as the first non-alcoholic craft beer to come from a hotel, the bottled brews come in five varieties: Office IPA, Strawberry Blonde, PC Pilsner, Safe and Sour, and Button-Down beer.
[1]

The birth of these boozeless brews, formulated by the beer, wine, and mixology team at the Grant Grill Lounge[3], was led by lead mixologist, Jeff Josenhans, who is also a Certified Cicerone and Level II Sommelier. According to a U.S. Grant spokesperson, to make the beverages, Josenhans and his team used local cask ales, removed the alcohol through a heated centrifuge process, then kegged and re-carbonated and bottled the new brews in custom bottles.

The entire process took place at the U.S. Grant in downtown San Diego, and launched June 18.

This creation doesn’t come completely out of left field — Josenhans, along with being a Cicerone, has actively elevated beer at the Grand Grill Lounge, established a reserve and vintage beer cellar collection[4] at the hotel that includes such aged and rare brews as Stone Imperial Russian Stout (2006), AleSmith Olde Ale MMXIV (2014), and a bottle of FiftyFifty Eclipse[5] aged in Pappy Van Winkle Barrels (2008), autographed by the brewer.

Additionally, every Friday, a rotating cask ale is released, available at the bar by the glass ($8) or as a cask ale cocktail ($12).

Anheuser-Busch has been hit with another investigation into alleged unlawful practices involving incentivizing retailers to sell its alcohol brands, including Budweiser. The allegations of “pay-to-play” come after a report released by the Massachusetts Alcoholic Beverages Control Commission (ABCC) claimed an Anheuser-Busch subsidiary provided more than 400 Massachusetts retailers with close to $1 million in free equipment.

The ABCC report states that based on financial records obtained from Anheuser-Busch distribution and sales subsidiary, August A. Busch & Co., the company gave bar equipment such as draft systems, coolers, and refrigerators totaling a value of $942,200 to 442 alcohol retailers in Massachusetts in 2014 and 2015.

The equipment includes 70 Budweiser Signature Draft Towers, worth up to $3,500 (and which, according to the AB InBev website, increase sales of Budweiser[2] beer by 12 percent on average); and 500 Budweiser-branded refrigerators, prices of which range from $500 for basic units to as much as $5,700 for advanced units with video displays, according to the ABCC report.

MORE: How Much is Enough? A Craft Brewer's Response to Sam Adams' Jim Koch[3]

Giveaways of this nature are unlawful in that they persuade consumers to purchase certain alcohol products without fair competition from other alcohol brands (for example, from smaller brands unable to provide such gifts, like craft brewers). According to the ABCC, the practice violates section 204 CMR 2.08[4] of Massachusetts General Laws, which states:

The report comes just two months after California’s Department of Alcoholic Beverage Control (ABC) of Sacramento announced that it reached a $400,000 settlement[5] with Anheuser-Busch for unlawful business practices with retailers there, involving one of the largest penalty fines in the agency’s history.

However, Anheuser-Busch claims that they provided these materials lawfully, and that they ceased providing the materials (like draft systems and coolers) to retailers as soon as the ABCC investigation began.

In an official statement from the company, Gemma Hart, ‎VP communications, Anheuser-Busch, said, “We have been working with the Massachusetts ABC since they first raised questions about permissible trade practices by wholesalers within the state. We believe that we lawfully provided branded point-of-sale items to retailers and plan to contest these allegations. We take trade practice compliance seriously and are committed to following the law.”

In addition to this statement, a source at A-B who is closely familiar with the case told Men’s Journal, “The ABC[C] is alleging in the report that the times we gave the [coolers and draft systems] away, the items [were] of substantial value. Our position is that we believe we were giving these things away lawfully. At the time [the investigation began], we were openly providing these branded point-of-sale items to retailers. When they started asking about it, we stopped providing them to retailers.”

Another point of contestation, according to the source, is that the term “substantial value” has never been defined by law in Massachusetts, nor by the ABCC. “When we were giving these items to retailers, we had no reason to believe they approached or exceeded these values,” the source said.

The allegations against Anheuser-Busch are one of several recent “pay-to-play” scandals in the state. In November 2016, Massachusetts-based independent beer importer Shelton Brothers filed a lawsuit against Craft Beer Guild[6] of Boston (a distributor owned by Sheehan Family Companies), alleging that the wholesaler’s “unfair and illegal” practices cost its company $1.7 million in sales.

That same month, the Alcohol and Tobacco Tax and Trade Bureau (TTB) announced it had accepted a $750,000 payment from Craft Beer Guild, following an investigation into the wholesaler for illegally incentivizing retailers, as reported by beer industry news website, Brewbound.[7]

Also worth noting is that the Massachusetts Treasurer's office deployed a task force earlier this year to examine Massachusetts’ decades-old alcohol laws[8].

“As I said, we believe what we were doing was lawful and we will contest these allegations,” the A-B source told MJ. A-B plans to contest the allegations at a public hearing scheduled to take place June 20, 2017. 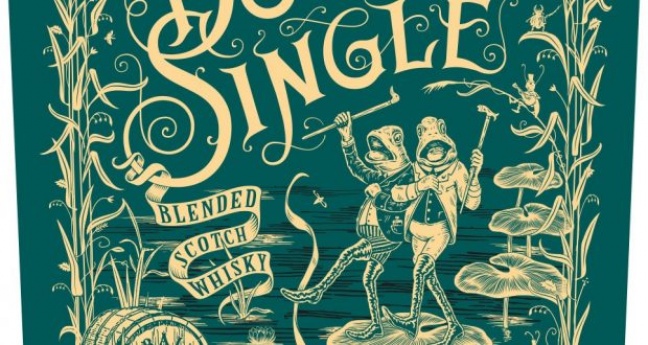 If whisky blending is an art form (we think so) then the Compass Box brand is one of the premier studios in the world for edgy, thoughtful bottles. Each of their releases is a careful attempt at pushing a theme in the form of a tasty dram of whisky. Consider the latest edition of Double Single another achievement of high whisky art.

Double Single comes out of a simple concept: Blending a single grain whisky with a single malt whisky. This is the third edition of Double Single, which was first created in 2003 when Compass Box founder John Glaser was approached by bar owners with a challenge: find a perfect match between one single malt whisky and one single grain whisky for a perfect blend.

Not to belabor the point, but sometimes artists create self-imposed limitations to test themselves. In this case it just came from friends. “I loved the idea,” Glaser said in a statement, “and our first two editions have become something of a cult favorite.”

It should be noted that blended whisky is often composed of around a dozen sourced liquids — a bit of peat from one distillery, some sweetness from another, domineering hints of oak from a third. That method has produced some truly amazing bottles of whisky over the years. Doing it with just two ingredients, however, makes for a lot less wiggle room to fine tune the final recipe.

Double Single hits retail shelves June 1. Less than 6,000 bottles will be available to the world, so expect a fraction of that here. It’s slated to retail for around $175, compassboxwhisky.com. For more Compass Box whiskeys, available for delivery by Drizly[4], go here[5].
[3]