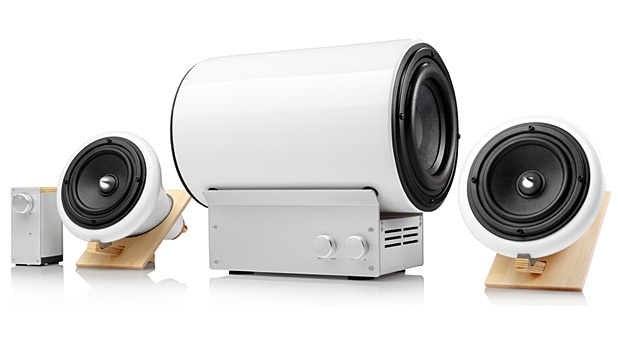 The advent of compact digital audio players was a revolution, and they have since been a life-altering boon to music fans. But the new digital paradigm has also had the unfortunate side effect of training us all to opt for generally low-quality ear buds, speaker docks, laptop speakers, and the like in the name of convenience. Recently we've found ourselves longing for something a little better, without having to take a step back to the days of bulky component systems and their massive, floor-hogging speaker towers. The Ceramic Speaker System, Version 3[1], is a new 2.1 setup by custom audio designer Joey Roth[2] that's equal parts pretty and great sounding. It has our hearts skipping a beat.

Pasadena-based Roth, 29, clearly has a Zen-like approach to craftsmanship: He strips away all the extraneous bits and focuses on the underlying purpose of what he's building. In this case, the goal is pure sound. "I wanted to eliminate every feature that didn't directly impact the sound," he explains. "Because I limited so much stuff, I could focus on the build quality, physical materials and how they're put together, and sound quality. I could ignore everything else." There's a clear Steve Jobs-ian current to Roth's design principles, and indeed the result – a sophisticated 2.1 system that is a study in restraint and design – speaks for itself.

The system consists of two white ceramic speaker cones paired with a similarly simply clad subwoofer cylinder. Each speaker contains two 4-inch, neodymium magnet-and-paper diaphragm drivers enclosed with a porcelain cone that is backed with cork. In lieu of a standard rectangular box, Roth perches his speakers in minimalist Baltic birch stands. The subwoofer is a barrel-like, free-floating, 10-inch porcelain cylinder containing two 6.5-inch neodymium magnet drivers (active on one side with a passive radiator on the other). All of this rests on an aluminum amplifier enclosure that acts as a base for the cylinder – altogether the effect is of a miniature Zeppelin on its landing pad. Whereas normally subwoofers are designed to stay hidden in a corner, this one stays front and center, flanked and complemented by the stereo speakers. A diminutive, rectangular unit controls the volume via a small knob and hides the 15 watts-per-channel Tripath 2023 amplifier housed in machined aluminum. Notably, there's no digital signal processor or filter, no plastic components, no extraneous anything. Just a completely analog system that delivers an audio signal as purely as possible.

We hooked up our iPhone, an MP3 player – not at the same time (see below) – and our turntable to the porcelain speakers and were rewarded with, frankly, the clearest and most nuanced sound we've ever heard on a system this size. When we positioned ourselves in the sweet spot – speakers aimed at a 45-degree angle directly level at our ears – we could have sworn the singer was directly in front of us. The 70 Hz to 20 kHz range of the neodymium drivers delivers such a clear, crisp sound that we had to continuously clean the dust off of our vinyl so it wouldn't affect the sound. While playing Neil Young's "Down by the River," our girlfriend heard for the first time what Young actually did to his girlfriend down by that river and asked us not to play it again. (Turns out there can be such a thing as too much clarity.)

With such a pared-down system comes a few inevitable sacrifices, namely, connectivity. There is only one RCA input (the V3 comes with a phono-to-RCA input cord), so switching between audio components can be a chore depending on your setup. Likewise, there is no remote to control the volume (and don't even think about an app for that). And though the volume can get pretty loud while admirably remaining distortion free, this system is undoubtedly better suited to an apartment-sized living room, or perhaps library or office space (15 watts just ain't enough oomph to fill large rooms). But these are some of the trade-offs that come with an "ignoring everything else" design ethos and for us they're easily lived with.

Roth has recently turned his design talents to another one of his obsessive passions: coffee. He's designing a stovetop espresso maker that, we can only assume, will look as good as the coffee ends up tasting. [$1,095; Joeyroth.com[3]]