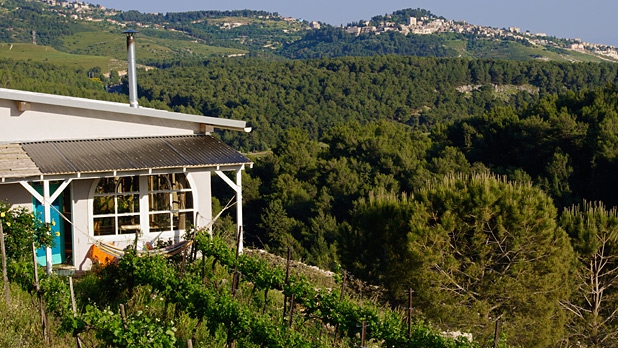 The view out of the wooden cabins carved into the steep slopes of Mount Kutar – olive groves connected by sunburnt trails – might lead a current affairs-illiterate traveler to conclude that Israel's northern border was the most peaceful place on Earth. Here, north of the River Jordan and the Sea of Galilee, the Cabins at Kadita offer a respite not only from civil strife, but from pretty much everything else as well.

The cabins[1] are named after the hillside they sit on, which Mikah and Doron Goldman first laid eyes on 30 years ago. Back then there were no roads or electricity or water here – just a mountain, a stunning view, and two olive trees. The couple saw an opportunity to live off the land, planting grapes for wine and olives for oil, and creating a quiet existence removed from the hustle and bustle of cosmopolitan Israeli life. They did just that for decades before deciding to invite the world in and renting out the five cabins they'd constructed from windows and doors Doron collected at flea markets.

The surprisingly comfortable habitats now available to travelers willing to make the two-hour journey from Tel Aviv are feats of rustic engineering. Mikah and Doron measured the direction of the sun and wind and built each cabin in order to maximize winter sun and summer breezes – one cabin is actually built into the rocks, which help regulate the temperature and provide a textured space for an indoor garden.

With gorgeous views of the pomegranate, lemon, and olive trees framed by floor to ceiling windows, the cabins strike a perfect balance between earthy design and ecological efficiency. Each mountain hideaway also comes equipped with everything a traveler might need, including a simple kitchenette, a potbelly stove, a claw-foot tub, hammocks, and barbecues. The cabins even have record players and an eclectic selection of music so every stay has a soundtrack.

The southern slope of Mount Kutar happens to sit below one of the world's most populated bird migratory paths, so bring your binoculars to glimpse the pelicans, cranes, and eagles soaring by in the spring and fall. If bird watching, grilling, and reading a book in your hammock aren't enough to keep you occupied, then you can get active quite easily, too: Hiking and walking paths abound, and neighboring Safed (five miles south) has a historic old city to explore. Rosh Pina, about 10 miles southwest, has some of the area's best restaurants.

Birds chirping and soft breezes blowing belie the fact that the cabins are only 10 kilometers from the Blue Line – the UN determined border between Israel and Lebanon. Safety is a natural concern for travelers to the region, which does indeed have a sometimes violent history, but the last major military conflict between Israel and Lebanon was in 2006[2], and the ceasefire that followed is still intact, even if the underlying tensions remain. At the moment the area feels safe, secure, and peaceful.

More information: Cabins start at around $150 per night[3] during the week more for weekends. Kadita is about a two-hour drive north from Tel Aviv. Jish is the nearest town with a grocery store and a butcher. 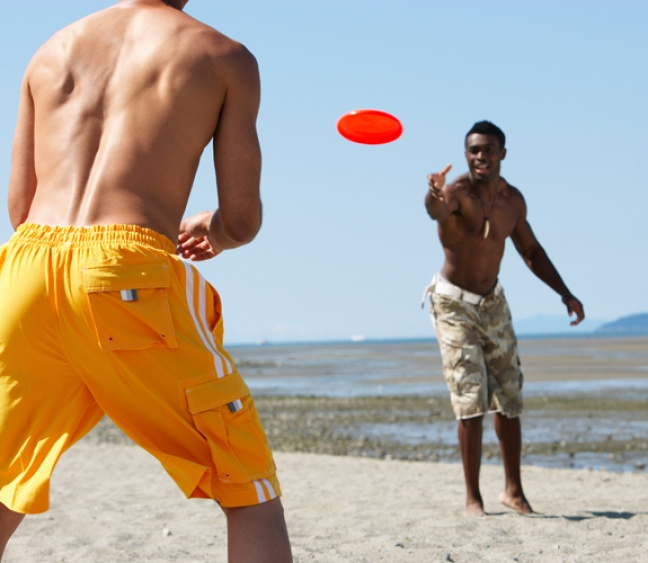 Prep and wax your car the right way and you'll turn heads on every drive. Follow these tips from Steve Carpenter, a detailing specialist at Galpin Auto Sports in Van Nuys, California.

WASH AND DRY
Park in the shade and hose off any loose dirt. Then remove stubborn grime using warm water, a microfiber wash mitt, and a pH-balanced car shampoo like Mothers California Gold Car Wash ($5, mothers.com). Rinse and dry with a leather chamois—try the Jumbo Wales Chamois ($50, autogeek.net). Now go for a quick drive to blow out any excess water in the car's crevices. Otherwise it'll drip out later and screw up your wax application.

SMOOTH THE SURFACE
Ready to wax? No, you're not. First go over your car with a clay bar kit, such as Smartwax's SmartClay Kit ($35, smartwax-usa.com). Doing one small area at a time, spray on the clay lubricant and glide the bar over those sections. This removes embedded surface dirt and old wax, allowing your new wax to adhere better and last longer. Easy on the elbow grease—if you rub too hard, you can strip sealant and paint.

APPLY THE WAX
Use a carnauba-based high-gloss wax. We like Autoglym High Definition Wax ($40, amazon.com), which protects against UV damage and acid rain. Use a back-and-forth motion as you apply it. (Mr. Miyagi was wrong—a circular motion can create swirls in the finish.) Then remove the wax with a fresh cloth, using the same linear motion. Use a soft brush to remove dried wax from around trim pieces. Now dig that shine.