The eight great chefs will convene at the Mandarin Oriental Hotel Bangkok[1] preparing exclusive menus allowing diners to sample food from some of the finest chefs across Asia in one stunning location, in just one week.

From Tokyo to Singapore, the event gathers some of the region's most celebrated names in gastronomy with many holding a place on Asia's 50 Best Restaurants[2] list. The chefs will showcase their unique styles in a series of solo or four or six hands dinners where the creative sparks are sure to fly.

Each dinner will be served in the exclusive surroundings of French fine dining restaurant Le Normandie in the hotel’s Garden Wing with breathtaking views over the Chao Phraya River, or the smart casual riverside venue of Lord Jim’s.

The series will begin with Chef Umberto Bombana[3], from ‘8½ Otto e Mezzo BOMBANA’, Hong Kong, at Le Normandie for evening service. He will demonstrate the culinary skills that have made it the first and only Italian restaurant outside Italy to receive three Michelin Stars, with a six-course menu.

The first "four hands experience" will take place at lunchtime in Le Normandie where resident chef Arnaud Sauthier will be joined by chef Julien Royer of two Michelin-starred Odette in Singapore, to create an exclusive nine-course lunch.  [4]

The sitting will offer guests a unique opportunity to taste the exceptional ingredients of some of the finest boutique producers from around the globe.

Meanwhile a trio of top chefs will participate in the nine course, "six hands dinner" on 19 February 2017 at the more relaxed venue of Lord Jim’s.

Fans of Italian cuisine won't want to miss the unique opportuity to book a table at Le Normandie on 22 February 2017 to discover the cuisine of Luca Fantin[7] from Il Ristorante, located in the ultra-exclusive Bulgari Hotel in Tokyo, Japan.

Fantin is known for his creative spin on Italian cuisine using quality seasonal ingredients where his artful creativity is certain to be showcased in his five course menu.

For the the grand finale on 23 February 2017, chef Dharshan Munidasa will fly in from Sri Lanka with a fresh batch of mighty lagoon crabs to cook at Lord Jim’s.

Guests will be treated to a six course dinner of enormous crabs, with sizes ranging from 500g up to ‘crabzilla’ specimens weighing over 2kg, spiced with the aromas of his native Sri Lanka whilst incorporating the flavours Mundisa has picked up from around the world.

For your opportunity to be part of a great gastronomic dinner series, book a table by emailing This email address is being protected from spambots. You need JavaScript enabled to view it. or contacting +66 (2) 659 9000 ext 7390.

This new edition forms part of the Fine Dining Lovers Guest Chef series, which brings renowned chefs to Thailand from top dining destinations around the world. Past editions have included Kirk Westaway[8] (winner of the 2015 S.Pellegrino Young Chef for Southeast Asia, from one Michelin-starred Jaan in Singapore[9]) and Ryan Clift from the famous Tippling Club[10] in Singapore.

We all know the chef life[1] is a tough one: long hours, stress, heat, and poor pay. It’s not for everyone. But for those who fall in love with the profession, it’s a lifelong relationship.

Over on the ChefTalk forum[2], chefs have been sharing exactly why they love the job and we’ve selected some of the best responses below. Perhaps you have something to add? Let us know over on our Facebook page[3].

Its going home at the end of the day and hearing "You guys did an outstanding job" from the GM, watching people sit and enjoy their meal, or simply getting to be creative with the food you produce.

Maybe it's seeing the faces of customers smiling and going on about how good their meal was. Maybe it's the fact you never have to worry about going hungry. Maybe I'm just a masakist (horrible spelling) who enjoys the heat, steam, fire and injuries. All I know is I'm happy when I'm there, love what I do because it's me.

It is the one place that everything feels right. I can let my creativity flow through my hands in the same way an artist does when creating a sculpture.

It is the pace that gets my juices flowing. The constant chatter of "what's on the new," the rush of heat you feel on your whole front side when you've just fired a juicy steak, the sound of fish being seared in the rocket hot pan, the beauty of the plated dish...

Stress, live on it.

Food. I'm not sure how to convey the love I have for the products I receive and seeing that they're used in a manner that fits something provided for us by the Earth.

I, like most, enjoy the organized chaos that is this life.

Plating. There's no sense of accomplishment that I've felt that compares to finishing a plate exactly the way you want it, all elements balanced, and you get that moment to look at it objectively, getting out of the way and letting the food do the talking.

For those four little words ... "This is sooooo good." To see the happiness and content on people faces after they've eaten. Knowing I put that smile on their face is what it's all about.

Sensuality. I don't think there's anything you can do that connects you more to another person than preparing their food. It requires an immense measure of trust, and your work becomes a part of another living breathing person.

While many of us enjoy the delights of sushi[1], are we sure that we're eating it correctly? There is certain etiquette around sushi that perhaps we're not all aware of, as we dunk our nigiri rice-first in our wasabi-flecked soy sauce – both definite no-nos. There's also a certain amount of conflicting information too.

The following then should serve as a definitive guide to how to eat sushi. Below you’ll find everything you need from experts in the field, including the one and only Jiro Ono[2]. You’ll never eat sushi wrong again.

A great place to start. Learn what the ginger served with your sushi is actually for and how to counter wasabi burn!

How to eat sushi

A very straightforward visual guide to eating sushi from Food Beast [3]– use your hands and dip fish-first into any condiments. Some would argue of course that you shouldn't be dipping into soy sauce at all, but that's another matter...

Here's a cutesy infographic from the Gourmet Society[4] showing the basics of eating sushi and Japanese dining etiquette. 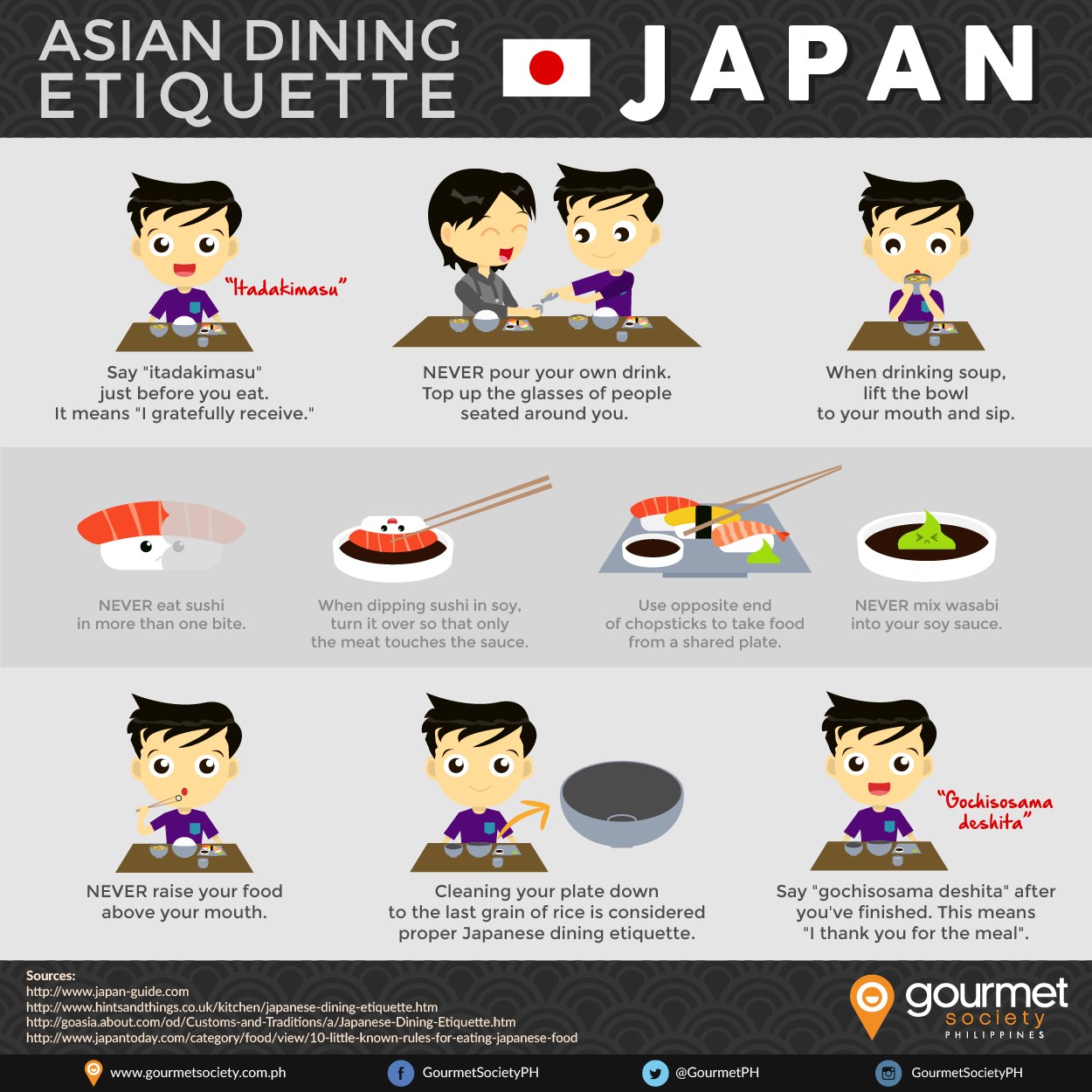 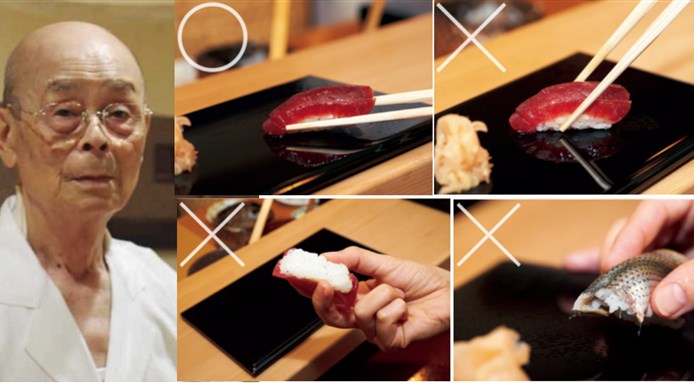 Here's another sushi master, Naomichi Yasuda[7], schooling Munchies on how to eat sushi.

Here's a funny video of a sushi chef reviewing cheap, store-bought sushi. It's fair to say he's not impressed.

We love creating quizzes here at Fine Dining Lovers. It’s a great way to test our own knowledge, as well as that of our readers! So, we’ve collected 10 of our best food quizzes to keep you busy over the holiday period, or a great excuse to slack off work for a few minutes!

Work your way through the quizzes below and don’t forget to let us know how you got on over on in the comments below or over on our Facebook page[1]. You’ll also find loads more quizzes here[2]. There’s plenty to keep you busy. Time to get started! 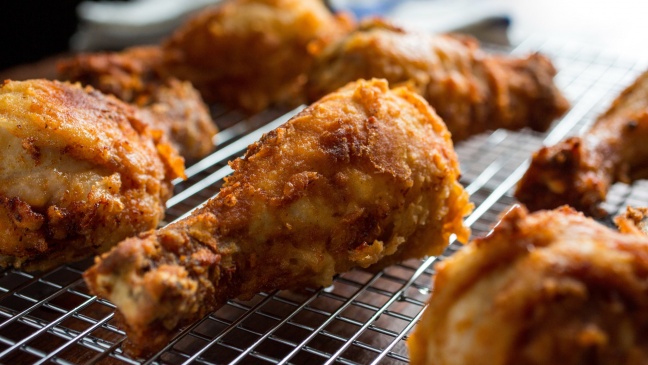 Over the weekend a young food reviewer going by the name of The Chicken Connoisseur [1]went viral – big time. His video reviews of chicken places, done while dressed like a true dapper chapper, have now been seen by millions and it seems his rather unorthodox approach has gained him quite a lot of fans.

Called The Pengest Munch, which loosely translate to the best food, the series sees the connoisseur travel around London reviewing fried chicken places.

Ok, we admit – it’s not fine dining – but his approach is hilarious and you've got to love the fact he dons a suit with sneakers every time he reviews a new place.

The short videos have racked up over two million views now – and his funny observations, his marking system and what actually constitutes peng are all worth viewing.