From being the star of an animated movie - Cloudy with a Chance of Meatballs – to a fine dining trend: meatballs are the new must in gastronomy, and Italians believe they own the original recipe. There are more and more restaurants that follow the trend - the latest one that opened in Milan, The Meatball Family, is owned by actor Diego Abatantuono - whereas La Polpetteria, in Catania, is a true institution when it comes to meatballs and has about 45 varieties. Many books celebrate meatballs and even the most renowned chefs put them on the menu.

It's official, meatballs are the new finger food at parties and informal dinners, the etiquette ban has been lifted off. It's not yet admitted at formal lunches (too easily associated with leftovers, and difficult to resist eating with your hands), but, the world has gone gaga over them, why? Meatballs have an Italian flair to them, they are creative, nothing goes to waste, are cheap and save time. Here is a look at meatballs.

A DEFINITION
Meatballs are made of a mix of eggs and finely chopped ingredients, shaped in different sizes and round: as small as a nut or like a mandarin. Don't mix it up with an hamburger: it's larger and has to be cooked like a bbq. Meatballs are more sophisticated and the fact that they are smaller makes it easier to cook the inside.

MEAT, FISH OR VEGGIES?
Looking at what's in them, there are three major meatball families: the ones with meat, the ones with fish, and vegetable ones. The "carnivore" fine dining and original ones are made with boiled meat or roasted, never raw. You should always cut the meat with a knife not to stress it, which is different than fish and vegetable, those can be put in a blender. Fish and vegetable meatballs should have less ingredients in order not to hide the primary flavors. Eggs help keep everything together, you might also consider adding cheese or grated bread for vegetable meatballs, softer milk-soaked bread with meat or a boiled potato to add softness.

BREADCRUMBS
Breadcrumbed means it was rolled over bread before cooking. You use grated bread of all sizes, tossed with aromatic herbs and spices. The thicker the breadrcrumbs the tastier and crunchier the meatball, just be careful to keep it soft on the inside. You can try experiments with new original recipes: organic hulled wheat and cumin; onion bread, olive bread, toasted flax seed oil, poppy seed, cornbread, ginger and so on.

HOW TO COOK IT
You can stew it, bake it, steam it or fry it. For the first three options is better to roll the meatball in white flour, if not grated bread will do. The ultimate meatball remains the fried one. Oil is important: the temperature must be between 165° and 185°, extra-virgin olive oil is perfect up to 210°, peanut oil is even better because it doesn't interact much with the ingredients and evaporates at 190°. Meatballs, contrary to other fried foods, don't necessarily have to be eaten steaming hot: they are as good the next day at room temperature.

On par with the trend in the USA[1] and Europe, South Africa has seen a proliferation of food trucks[2] of late. Serving gourmet meals at lunchtime, snacks throughout the day, and those that cater for weddings and parties, a mobile food service makes sense. It is estimated that globally, 2.5 billion people eat street food every day. Bringing the concept to city centers, office-dense spaces and favored weekend hangouts, is a practical solution to meet the demand for good, fairly inexpensive food.

The food truck movement as we currently know it evolved from a direct response to the recession around 2007 in the US, where restaurants had to downscale operations and patrons had less cash to spend on lunch. Fully kitted, well-designed trucks contain small but operational kitchens, and food safety is strictly monitored by city health officials. The food truck movement may seem trendy and modern, but it has its roots in 1886 America. A rancher, Charles Goodnight fitted a surplus US Army wagon with kitchen amenities to create the first kitchen on wheels. Wagons like these were known as ‘chuck’ (or ‘chow’) wagons.

While growth in South Africa has been slow, as opposed to the mushroom-effect in the United States, there is a constant trickle of new trucks as the word spreads. Luca Castiglione runs the now famous Limoncello food truck in Cape Town and heads the informal Food Truck Association which serves as an agency for food trucks regionally. The association assists with all aspects of the business from design to marketing. A location for the trucks to park is a contentious issue, as there is no formal legislation that makes provision for them. The Cape Town Informal Trading by-law acknowledges the need to recognize and assist informal traders, mostly street vendors, but much is left to the private sector, says Paul Williamson, from the Cape Town city council.

Chef Bertus Basson of Overture, who owns Die Wors Rol truck, that caters gourmet hotdogs at events, feels that the South African public is ready for the concept, evident in the number of trucks popping up. Consequently, food trucks now face competition for space and market share, especially from restaurants that have recognized the opportunity and developed their own. Like it was for the wildly famous Korean Kogi truck in Los Angeles, social media has played a huge role in the popularity of the trucks and knowing where to find them. Castiglione does no advertising, apart from Twitter and Facebook posts. “Word of mouth on social media keeps bringing us new customers,” he says.

While curbside vendors in South Africa, selling made to order fried snacks like sheep liver and beef steaks grilled over the coals, are common, especially in the townships, we’re yet to see the true kasi (or township) cuisine hop onto the food truck bandwagon. Costs involved may make the venture prohibitive initially, but this could be a solution for providing local township foods in the heart of the metropolis, where city workers are craving a taste of home. Pretty soon, food trucks may be roving the streets of Cape Town and Johannesburg, selling the classics loved by South Africans. Biltong (a traditional dried, spiced meat), braaivleis (meat made on the barbeque), pap en wors (stiff white maize and thick grilled sausages), bunny chow (curry in a hollowed out white quarter loaf) and koeksisters (a plaited deep-fried crisp doughnut drenched in sugar syrup) – there certainly is a market for it. 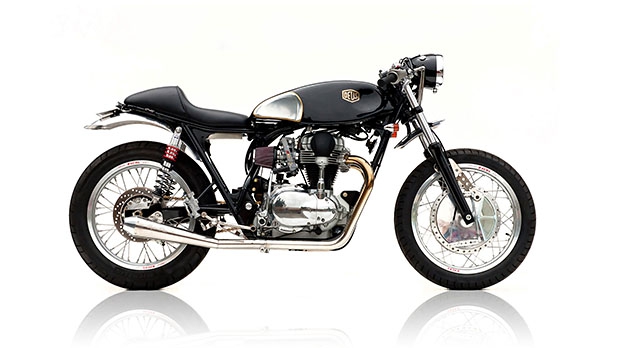 The Fiddler by Deus Ex Machina

The advent of compact digital audio players was a revolution, and they have since been a life-altering boon to music fans. But the new digital paradigm has also had the unfortunate side effect of training us all to opt for generally low-quality ear buds, speaker docks, laptop speakers, and the like in the name of convenience. Recently we've found ourselves longing for something a little better, without having to take a step back to the days of bulky component systems and their massive, floor-hogging speaker towers. The Ceramic Speaker System, Version 3[1], is a new 2.1 setup by custom audio designer Joey Roth[2] that's equal parts pretty and great sounding. It has our hearts skipping a beat.

Pasadena-based Roth, 29, clearly has a Zen-like approach to craftsmanship: He strips away all the extraneous bits and focuses on the underlying purpose of what he's building. In this case, the goal is pure sound. "I wanted to eliminate every feature that didn't directly impact the sound," he explains. "Because I limited so much stuff, I could focus on the build quality, physical materials and how they're put together, and sound quality. I could ignore everything else." There's a clear Steve Jobs-ian current to Roth's design principles, and indeed the result – a sophisticated 2.1 system that is a study in restraint and design – speaks for itself.

The system consists of two white ceramic speaker cones paired with a similarly simply clad subwoofer cylinder. Each speaker contains two 4-inch, neodymium magnet-and-paper diaphragm drivers enclosed with a porcelain cone that is backed with cork. In lieu of a standard rectangular box, Roth perches his speakers in minimalist Baltic birch stands. The subwoofer is a barrel-like, free-floating, 10-inch porcelain cylinder containing two 6.5-inch neodymium magnet drivers (active on one side with a passive radiator on the other). All of this rests on an aluminum amplifier enclosure that acts as a base for the cylinder – altogether the effect is of a miniature Zeppelin on its landing pad. Whereas normally subwoofers are designed to stay hidden in a corner, this one stays front and center, flanked and complemented by the stereo speakers. A diminutive, rectangular unit controls the volume via a small knob and hides the 15 watts-per-channel Tripath 2023 amplifier housed in machined aluminum. Notably, there's no digital signal processor or filter, no plastic components, no extraneous anything. Just a completely analog system that delivers an audio signal as purely as possible.

We hooked up our iPhone, an MP3 player – not at the same time (see below) – and our turntable to the porcelain speakers and were rewarded with, frankly, the clearest and most nuanced sound we've ever heard on a system this size. When we positioned ourselves in the sweet spot – speakers aimed at a 45-degree angle directly level at our ears – we could have sworn the singer was directly in front of us. The 70 Hz to 20 kHz range of the neodymium drivers delivers such a clear, crisp sound that we had to continuously clean the dust off of our vinyl so it wouldn't affect the sound. While playing Neil Young's "Down by the River," our girlfriend heard for the first time what Young actually did to his girlfriend down by that river and asked us not to play it again. (Turns out there can be such a thing as too much clarity.)

With such a pared-down system comes a few inevitable sacrifices, namely, connectivity. There is only one RCA input (the V3 comes with a phono-to-RCA input cord), so switching between audio components can be a chore depending on your setup. Likewise, there is no remote to control the volume (and don't even think about an app for that). And though the volume can get pretty loud while admirably remaining distortion free, this system is undoubtedly better suited to an apartment-sized living room, or perhaps library or office space (15 watts just ain't enough oomph to fill large rooms). But these are some of the trade-offs that come with an "ignoring everything else" design ethos and for us they're easily lived with.

Roth has recently turned his design talents to another one of his obsessive passions: coffee. He's designing a stovetop espresso maker that, we can only assume, will look as good as the coffee ends up tasting. [$1,095; Joeyroth.com[3]] 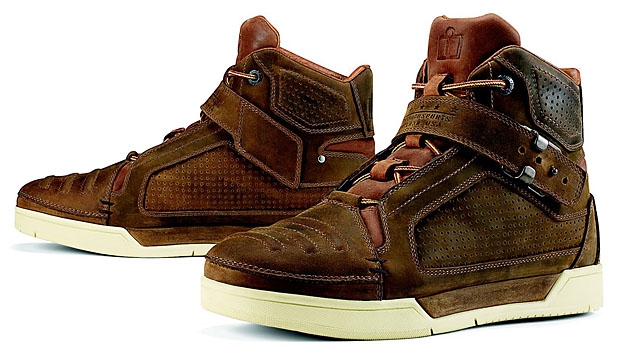 Icon's reinforced Truant kicks are a street-savvy antidote to the knee-high RoboCop look of most moto boots, and combine a tough steel shank with crushproof toe protection. [$200; icon1000.com[4]][3]